The older Lowrance Globalmap and LMS series of marine electronics are terrific GPS receivers. The only common issue I see with them is that the GPS antenna units for them often go bad. The antenna are about 4" round white pucks that you mount high up on your boat that actually contains the GPS antenna / receiver along with an optional DGPS receiver. This then connects to the back of your Lowrance unit supplying power and communication to the antenna from the head unit itself.

There are two series of these GPS antennas depending on how new your Lowrance unit is. The older ones are NMEA-0183 based while the newer stuff is NMEA-2000 based (most models support both). The advantage of the older 0183 protocol is that is uses a simple RS-232 serial interface, while the 2000 protocol is CAN-bus based (not that this is bad, CAN is a great protocol, but for the point of interfacing these units the RS-232 protocol is significantly easier to work with). Both of my units (A Globalmap 3000 and LMS-480) support NMEA-0183.

Repairing the antennas themselves is a huge pain. I have a dead Lowrance LGC-3000 GPS CAN bus antenna that I cracked open to take a look inside, these units are definitely designed to not be opened, it took some serious cutting to get inside.


Nothing unexpected found, a basic GPS receiver, small micro, and an impressive watertight enclosure. Typically I see the micro and/or GPS receiver itself is dead. I'm not sure if heat is the cause or possibly static discharge is, but repairing usually isn't really feasible. Just getting into the thing pretty much destroys the nice water-tight enclosure.

So what to do if your GPS antenna is dead and don't want to spend $100+ for a new one? Simply use any GPS receiver that outputs NMEA-0183 data and feed it directly into the Lowrance spare serial port. This is pretty much every GPS receiver / module ever made.

Each device within the Lowrance family has an optional NMEA-0183 input (and sometimes output depending on device) that allows you to daisy-chain units together. So a single unit connected to the GPS antenna can send the GPS information via NMEA-0183 through multiple units allowing you to need only one antenna. Now the cool thing about this is in the Lowrance configuration menu, you can set which serial input you wish to receive the GPS information from along with what GPS strings you want to receive. This means you can feed NMEA-0183 GPS strings directly into the units spare serial input from any 0183 compatible receiver, not needing to use the Lowrance expensive antenna.

My solution as to use an old 12 channel Cirocomm receiver that I have had laying around which cost about $12. This receiver runs off of 3.3V- 5V and outputs TTL level NMEA-0183 GPS strings. The original GPS  module in the LGC puck can also be used as long as it is not dead itself. To use this with the Lowrance, I added an RS-232 level converter and small power supply to run directly off of 12V. I had these boards already designed and built for Xbee use, it was just a matter of wiring in the GPS unit to make it work. The only downside of this is you need to power the GPS unit directly as the Lowrance does not supply power on the spare serial interfaces like it does on the direct GPS interface. The serial interface requires only two wires, TX from the GPS antenna to RX on the Lowrance unit and ground. You could also interface this into the GPS input connector on the Lowrance, but if you are missing the antenna and cable, wiring to the spare serial interface avoids sourcing the expensive twist-lock connector. Once the new receiver is put together the only thing remaining to do is to mount it in a sealed watertight enclosure, something nice looking so it doesn't look stupid. Also preferably something plastic and white to reflect heat and be transparent to the GPS signal. 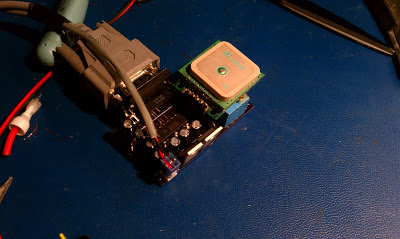 To use, set the Lowrance to use the NMEA-0183 input for GPS, then set the correct baud rate and GPS strings your receiver supports ($GPGGA and $GPGLL are the important ones). That is all, the Lowrance should respond indicating it is receiving GPS data and begin to populate you satellite information screen. Multiple units can then also be daisy-chained in the exact same manner.

My Cirocomm GPS unit defaults to 4800 8N1, which is fine and sends $GPGLL, $GPGGA, $GPGSA, and $GPRMC strings, so make sure those are selected in the GPS configuration. If daisy-chaining, make sure the NMEA outputs are also enabled and set to the same baud rate on the sending units.

Note that again almost any GPS receiver can be used to supply GPS information to the Lowrance. Something like an old Garmin GPS 12 also works great as a spare if your antenna dies, simply take its NMEA-0183 output and feed it directly into the input of the Lowrance in the exact same manner.