Ham radio operation on 10GHz and above is one of the many things that finally persuaded me to get my ham license. I love RF design, specially in the microwave bands, so allowing me to do so and at the same time travel to hilltops to work line of sight contacts just sounded awesome.

10GHz is the easiest place to start as surplus (and new) components are plentiful. Most of my station was built through surplus parts purchased on eBay and from the Dayton Hamvention. The rest I milled and assembled out of various parts I had laying around.

The best part about 10GHz and up is there is no off the shelf hardware available to work these bands. There are some commercial bits available such as Kuhne transverters and such that can simplify the design greatly, but you still have to homebrew the rest of the radio. This is what makes 10GHz and up so neat, there are no two radios that are alike. Each and every design is different based on the components available and how you want to make it. With most of the assembly complete, here is my stations final build:


My design is based on the following:

Please excuse the crudeness of the above block diagram, I have a better one somewhere, but this one is pretty accurate to the final design. The design in its simplest form consists of a mixed upconverter / downconverter handing the signal transversion between a 144Mhz IF to the 10.368GHz RF. A PLL brick oscillator provides the 10.224Ghz LO signal. RF switches with a custom designed TX/RX sequencer handle the path switching as well as the power switching for the power amplifier.

The transmit and receive paths each have their own device chain separating them from each other. I went back and forth on this decision as I could have easily used a single mixer with additional RF switching, but I chose the dual paths as it actually simplified the design and I had the mixers available. So with this decision, each path contains its own mixer, both driven by the same local oscillator. 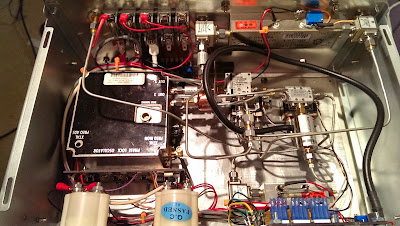 The local oscillator itself is a PLL brick that uses the x13 harmonic off of an ovenized crystal. The original output frequency was slightly off of 10.224GHz but was tuneable to my desired LO frequency. A nice feature of this brick is that it contains two outputs, each which provides more than adequate drive of about +13dBm for both mixers. A downside of this LO is that its stability is not perfect. Warm up time takes about 10 minutes or more until it has a stable frequency without drift. Another issue it is is very difficult to tune precisely which results in it being a few KHz off of my desired frequency. This ultimately plagued me during testing.

RF switching between each pathway is handled by a SPDT failsafe RF switch good up to 18GHz. A  switch is located on each end (at the antenna and radio). Being failsafe switches, upon any failure of the TX/RX sequencer the relays will fail to the TX side preventing me from accidentally transmitting into the RX path. The switches need +28VDC drive to function which is provided by a small DC to DC boost power supply.

Filtering occurs in many places and is a necessary requirement for this device to function. The most critical filtering has to occur out of the RF side of the mixers before the PA to allow the 10.368GHz RF signal to pass while blocking the 10.224GHz LO mixer leakage among other spurs. Additional filtering is also needed at the output of the RX mixers IF side to filter additional spurs and other high freq signals along with filtering on the RF side of the RX amplifier.

Low frequency filtering is relatively simple to accomplish as off the shelf filters for 144MHz are easy to source. The 10.368GHz filters are much more challenging. Many solutions are out there including building copper pipe cap based filters. I tried building a few of these with somewhat success. The filters did work but tuning was difficult and the passband was much wider than I wanted resulted in some 10.224GHz leakage. They have been proven to work and with some more tweaking (adjusting probe length and spacing) along with cascading some of them in series I know they could be used, but I ultimately decided to go with a different solution. I came across a couple nice Harris Farinon 10Ghz cavity waveguide filters that can be tuned to 10.368Ghz and have a very narrow passband. Based on the excellent performance of these filters they would be used in the final design.


Due to the fact that this entire setup will be portable,  power would be provided by a 90 amp hour 12VDC sealed AGM battery. I have several of these and they are terrific mobile power sources. This would power both my entire transverter along with the Yaesu FT-290R II radio. Many voltages are required to power all of the necessary components within the transverter so a DC to DC boost converter is used along with various linear regulators to provide the necessary components their required voltage and current.

Automatic TX /RX sequencing was a necessary requirement for this transverter to function, having to manually switch the signal chain before each transmission was just not a feasible option. To do do this I would need a 2M radio capable of indicating when it was transmitting so I could interface directly off of it. I chose a  Yaesu FT-290R II for this transverter as I already had one and it is a terrific all mode 2M portable radio. An options with this radio was an additional external amplifier that clipped onto the back of it which was good as it provided a way of indicating when the radio was switching into TX for this external amp. I used this output to drive the input on my sequencer.

The sequencer is very basic, it's just detecting the TX logic from the Yause to switch some relays for the RF switches and PA power in order. It also provides some led status indicators to verify its operation. There are two additional locations for relays that are not used, they were for the original design using four RF relays instead of two.

Amplification occurs at two points, a preamp directly off of the RX chain from the antenna and a power amp at the end of the TX signal chain. The RX preamp is a harris unit with +33dBm of gain at 10.368Ghz. The power amp is another Harris unit that can provide up to 100mw of output, this is lower than I had hoped but it will do just fine for now. I have 10GHz isolators on the amplifiers to prevent any stray reflections from coming back into the amps.

Physical construction consists of a small metal enclosure to house all of the transverter components. The box is white in color to reflect sunlight off of it during the day to help prevent it from going up in temperature. Inside, most RF components are mounted on a 1/4" aluminum sheet. I milled various other blocks and mounts to hold the other remaining components. This provides a very solid platform for everything in addition to being an adequate heatsink for the RX amplifier mounted directly to it. The PA amplifier is mounted directly to the back of the enclosure and mounted to a nice black Foxconn aluminum heatsink that came off of on old Pentium III Xeon processor. I went oversize on the heatsink as I plan to eventually replace the PA with a more powerful one. The front panel has a volt and amp meter and necessary power switches. The additional pushbutton is for manual RX / TX operation if for some reason the sequencer was not working.

The dish is a RadioWaves 18" aluminum dish with 37.8dBi of gain. It was originally designed for 43GHz operation so I had to cut off the front cover and remove the internal 43Ghz cassegrain feed. I then mounted a WR90 waveguide-to-coax transition with a small feed horn at the feed point with three brass rods. The mount is very rigid and allows for some flexibility in adjusting the feed to be right on the focal point. Very low loss Suhner Sucoflex microwave coax is used to connect the feed to the back of the transverter. The Yaesu radio is mounted directly to the top of the transverter via some velcro.

For mobile use, a motion picture camera tripod was used to mount everything together. It is a perfect mount as it is extremely sturdy but very lightweight since it is made completely out of aluminum. I usually will strap the battery placed underneath it to the bottom support of the tripod to give it some extra stability on windy days, but it has worked excellent for mounting the transverter and antenna. Setup and teardown is very fast as it is all held together with a few threaded rods. 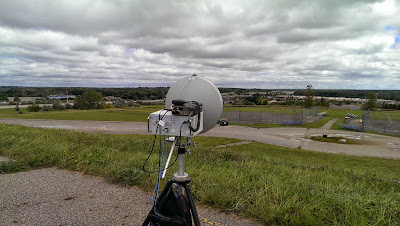 A future post will discuss my first real testing of the unit during this past Septembers ARRL 10GHz and up contest, overall I was happy with the first testing as it almost worked really well. This was a good first real world test that isolated some issues including implementing better filtering and a more stable LO. The winter months will give me some time to get everything perfect before the spring.