Earlier this year I built the first version of my frequency synthesizer which was to provide a stable local oscillator frequency of 5.4Ghz. It was based on an Analog Devices ADF4107 PLL chip paired with a Z-Comm VCO. Control is provided by a Microchip PIC 18F14K50 microcontroller. The original design I had made was specifically for a Z-Comm V940ME02 VCO to provide the 5.4Ghz LO source that I wanted to use for downconversion of various amateur satellites (FITSAT-1 being one of them). The ADF4107 is a very versatile frequency synthesizer with 7Ghz of bandwidth. Using it I wanted to leave my design flexible for other frequencies for various other designs requiring stable local oscillators. With this in mind, I stuck with the Z-Comm VCO mini-14 form factor to give me the flexibility for many other frequency ranges including the one shown here.

Another design feature is the addition of a serial interface. Analog Devices ADIsim PLL software provides the tools for programming either fixed or tunable PLL designs. While the two units I have now built do not require tuning as they are fixed frequency, having the possibility of tuning or simply a status of frequency lock via RS232 was a nice addition.

The next unit I have made provides a fixed 1.35Ghz LO source that I will be using for radio astronomy. 1.35Ghz will provide a 70Mhz IF from the target 1.42Ghz hydrogen line frequency. Only a few modifications were needed on this second unit from the original design:

1. A new VCO had to be chosen, a Z-Comm V602ME15 was selected with a tunable range of 1100Mhz to 1400Mhz.
2. A new loop filter had to be calculated which ADIsim PLL was able to do for me. Several high frequency capacitors and thin-film resistors were used.
3. The PIC had to be programmed to write the correct register values to the ADF4107. The PLL calculator on Analog Devices website was attempted to be used for this. Interestingly its calculated values were not working as it would not lock with them in place. After manually calculating the values out and programming them in I was able to get a successful lock.
4. The output filter had to be replaced. A 5.4Ghz bandpass filter was easy to source in the original build as that is used in 5Ghz wifi access points as part of the 802.11A and N frequency ranges. Unfortunately a filter centered on 1.35Ghz was not easy to find. For the time being I have bypassed the filter on the board which did end up with a spur on its output (will discuss more in a bit).

While testing the original 5.4Ghz version, I was limited to measuring its performance by my test equipment. I was able to measure the peak frequency output via my EIP 18Ghz frequency counter and its RF output could be measured by my Boonton microwattmeter. Unfortunately my best spectrum analyzer only goes to 3Ghz, so spurs and phase noise would not be measurable. With my new design on 1.35Ghz, these measurements are now easily obtainable.


Once the ADF4107 registers were programmed correctly, I had an immediate lock and very clean RF output. The Z-Comm VCO has a rated output of 7.5dBm. I have a small pad on the VCO output to both feed the loop filter and stabilize the VCO which results in a final output of roughly .70dBm. Driving my mixer will need a slight higher output so an external amplifier will be used.

Now to check phase noise, I zoomed into a 100Khz and 10Khz span respectably: 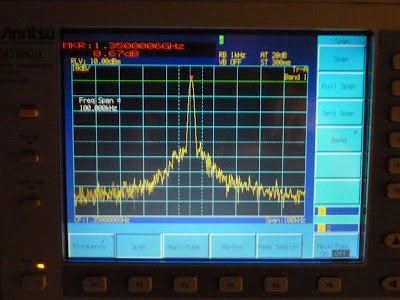 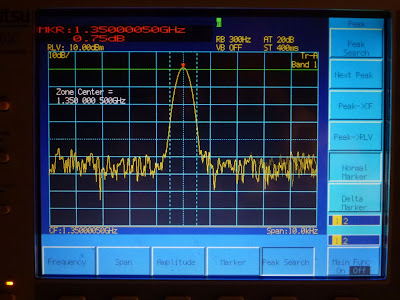 Using the 10Khz span to calculate phase noise, my results are -65dBc/Hz. Not quite as good as I would like, although adequate for my needs. There still may be some performance I can get out of the design by adjusting some of the other registers within the ADF4107.

I am still very happy with the output, the results are a very clean peak near perfect on frequency with no noticeable drift. Looking at a full span of 10Mhz to 3Ghz, there is one noticeable harmonic at the 2x frequency of 2.70Ghz. Due to the fact that I am not using my onboard filter. I will have to add an external lowpass filter to remove it. 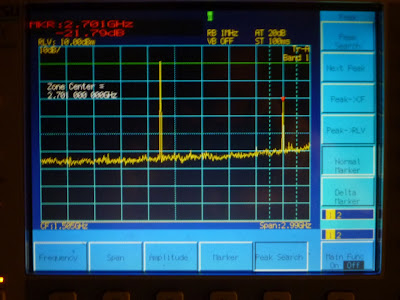 Posted by Unknown at 1:14 AM No comments: