Due to the fact that my Tektronix 2246 is currently out of commission (although parts are on the way as I did find a parts unit 2246 scope) I have focused my attention to my other favorite Tektronix scope, the 2445B. I primarily use my 2246 as it was the first 'real' scope I purchased about 10 years ago and is a rock solid analog scope. A few years back I came across a 2445B for a good price and have used it mostly for portable use as it is slightly smaller than my 2246. My 2445B also has Tektronix calibration stickers intact from 2002 indicating at least that no one has been inside mucking around with it.

My specific 2445B is the 150Mhz version and is in excellent condition although there have always been a few issues. The on screen display would jump around and not have a clear focus regardless of the focus adjustment and other internal astig calibration controls. When changing volts or time functions there would also be erratic display behavior. Knowing that the scope was over 20 years old and has unknown operational hours, I decided to start with a full capacitor replacement of the power supply. Electrolytic capacitors do go bad over time from several factors, so replacing them is a common step in all old electronic equipment.

The first step is to take it apart and inspect it. I will say the 2445B is one of the better scope designs I have worked on from Tektronix. The design is very modular with the power supply being very easy to access. Once removed, the power supply pulled apart into two boards shown here:

There are quite a few caps between the two boards, luckily most are radial caps and not axial. As I began inspecting the caps themselves I was surprised to see that some were rated for only 85 Degrees C instead of the higher 105 Degrees C rating. I also noticed that some were definitely showing some 'bulging' which is usually indicative of high heat and ultimate failure, although none were leaking. Some other things I noticed were that all of the high voltage film capacitors looked stressed. They had slightly bulged as well and had crack marks on their casings. A few resistors also looked bad including two 15 Ohm ones within the surge protection circuitry in the line level input stage. One had actually blow open and had a physical crack in it.

Additionally looking at the A5 Control pcb I noticed that there were four surface mount electrolytic capacitors on it. I learned how leaky these caps can be after a complete Tek TDS-420 restoration which needed a total of about 75 of them replaced. Looking closely at the board I could already see they were leaking and causing corrosion to traces, so they would be replaced as well.

Ultimately I decided to replace every capacitor on the power supply boards and the four smd caps on the control pcb. I would leave the caps on the A1 main pcb alone for now as they are primarily low voltage and would be considerably more work to replace. If there was still issues post-recap I would then consider replacing them as well.

For electrolytic capacitors I always go with Panasonic 105 Degrees C units. I will use Nichicon 105 C unit if a Panasonic value is not available. The film capacitors were replaced with Kemet units which were actually also the originally spec'd components. I upped the blown 15 ohm resistors to 3W units. For those interested in re-capping their own Tek 2445B (or variants) here is my Digikey parts list:

Most of the Tektronix 24NN family (2445, 2455, 2465, 2467, etc) has the exact same power supply, so the component list above should apply to all. Here are the rebuilt power supplies once all components arrived:

Once completed there were about 45 components in total that needed to be replaced. While the large Sprague 290uF caps were probably were fine I replaced them for good measure anyway.

All completed and reassembled my 2445B has a beautiful display and extremely sharp digital readouts. I don't see any need to replace the A1 pcb caps at this time but will still consider it for the future. With a total component cost of $31 and about two hours of time I would recommend this rebuild for any original 24NN scope.

How I Accidentally Destroyed my Tektronix 2246

I have talked many times about my Tektronix 2246 oscilloscope in the past as it is by far my favorite analog scope. Simple, reliable, and inexpensive and was the first 'real' scope I had purchased used about 10 years ago. So to destroy it, all I had to do was take the enclosure off.

All Tektronix scopes of this era usually have handles attached to them for portability which is a nice feature. My problem was that I never take it anywhere, it stays firmly situated in the center on my bench as it is my go-to scope for most basic troubleshooting. Having the handle attached resulted in one problem, it prevents you from easily stacking anything else on top of it. With an ever growing bench of test equipment I really needed the real estate on top of it, so the handle had to go.

Removing the handle requires unfortunately more work than necessary. There is no external bolts to remove to take it off, instead the bolts attaching it are on the inside requiring the entire enclosure to be removed. While somewhat annoying, the handle has a well designed strong attachment to the scope. If I were to transport my scope around I would have no concerns of the handles integrity.

Normally the covers of all scopes in this era come off easily, typically there are 4 screws on the back of the scope and maybe one or two on the sides. Once removed the back then falls off and the entire cover slides off the back. Normally I place the scope standing vertically and lift it straight up via the faceplate while the cover then remains on the bench. My Tektronix 2246, 2445B, and TDS-420 all have this very similar design (and have removed the later two without consequence).

So what went wrong? There was unfortunately a few dents on the bottom of the units case that I did not consider to be an issue. When I began sliding the cover off, it slid about 6" or so and had some resistance. Not seeing anything to be a problem I pulled a little harder (not excessively) and the cover did continue to come off as normal. Once removed I saw a small round heatsink laying on the bench. That's odd I thought, as I don't recall hearing anything rattling around inside previously. Once I looked to see where it came from I realized what had happened. 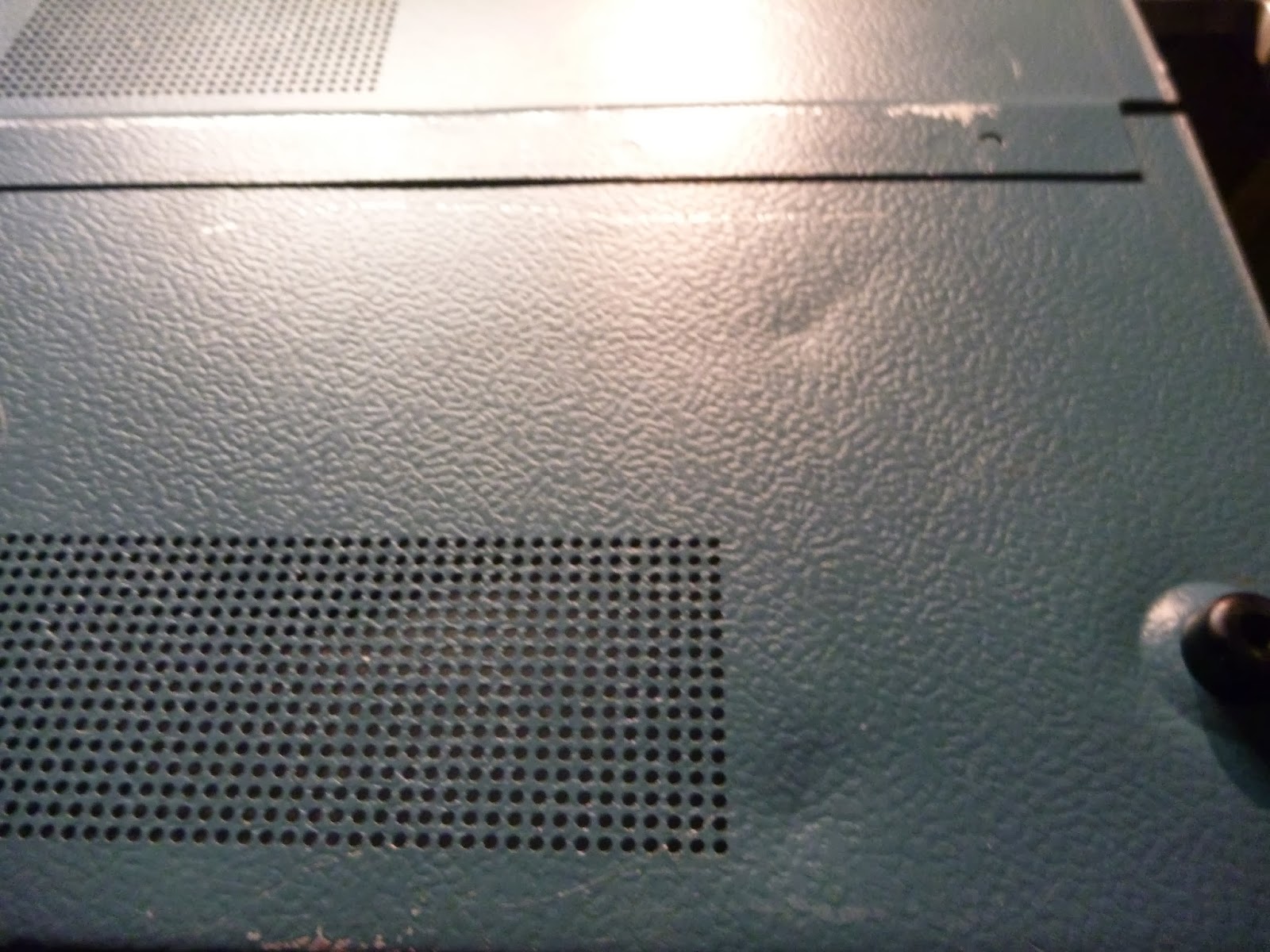 The dents on the cover that were pushed in had snagged a transistors heatsink on the bottom pcb. This had then put force on a TO-39 transistor ripping one of the leads off of it. 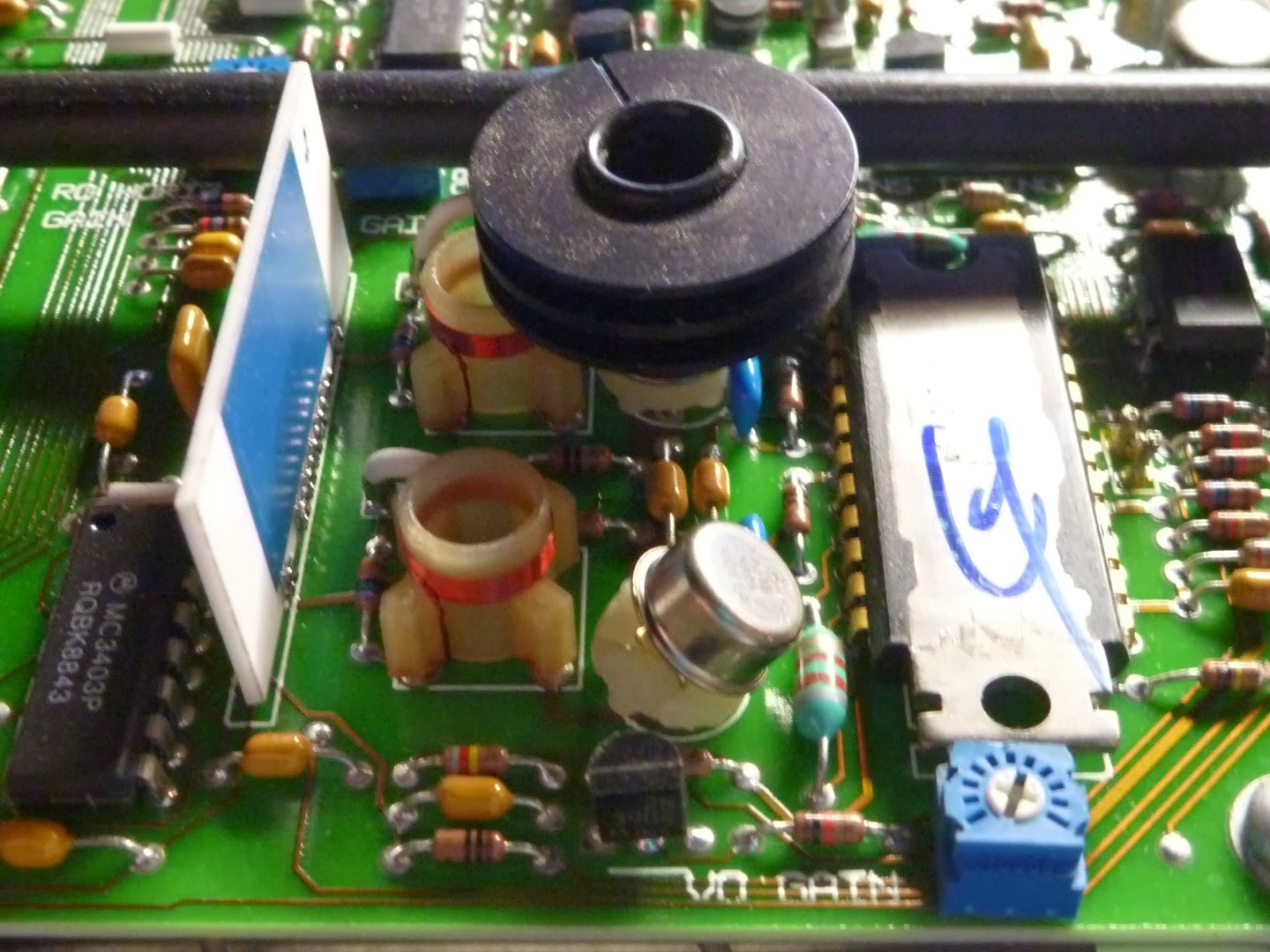 The transistor itself was not salvageable as the missing lead had been physically torn out of the can. Looking into the part itself it looks to not be an easy replacement. The markings on it reference it to a custom Motorola / Tektronix part number of 151-0846-00. 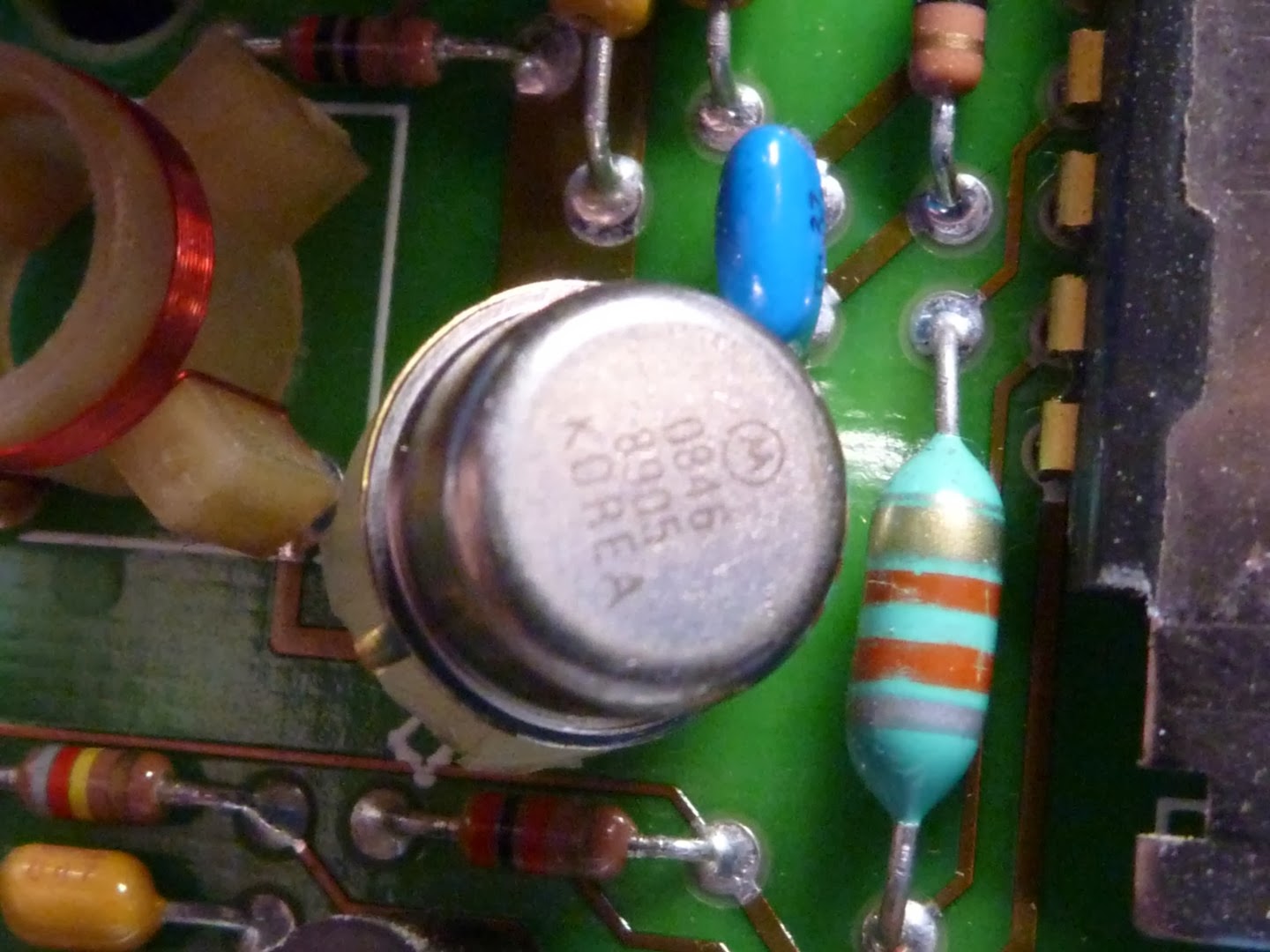 Searching for this part I discovered two things. 1. I'm not the first person who this has happened to. 2. There are no easy to find replacements for this part. The part is critical to the scopes operation as it will not power up without it in place.

The part cross references to a SRF5286 or 2N3866A. The 2N3866A is possible to find and purchase inexpensively, but reports from others say that since it is not an exact replacement for the original Motorola part, it will not work. I'll probably give it a try anyway and also be looking for a 2246 parts unit in the meantime.