For years I have used RG-58 cable for my antenna systems, it is inexpensive, easy to work with, and for short runs it works just fine. Last year I started heavily receiving NOAA weather APT imagery using the same RG-58 cable. During this time, pass after satellite pass I noticed my images were not as pristine as they should be. The cable length I was using was just over 100' in length and looking at the loss of my RG-58 it's no surprise that I had such poor images. As a test I replaced all of the cable with a used length on Andrew LMR-400 cable which resulted in an instant improvement.

Now this past week I finally mounted a wide-band scanner antenna on my home and needed a 60' run of cable to reach my RF bench in the basement. Instead of going to my typical spool of RG-58, I wanted something better. LMR-400 was my first choice but is significantly more expensive than my free RG-58. Because of this and the fact that a smaller diameter cable would be better hidden on the outside of the house I chose LMR-200. I purchased 60' of Times Microwave LMR-200 (arguably the best cable you can buy). 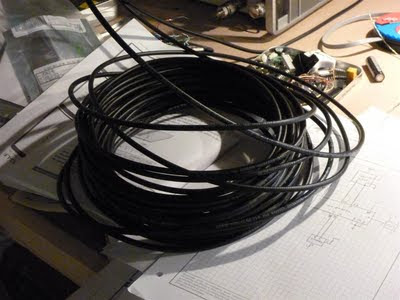 With an attenuation of 9.9dB @ 900Mhz, it was significantly better than RG-58. This cable combined with quality Amphenol SMA connectors I was curious to see if the cable would measure up to it's spec sheet. Times Microwave rates it's LMR-200 at 9.9dBm of attenuation at 900Mhz over 100'. At my 60 feet I should only be seeing 5.94dBm of loss which is what I am looking to verify. 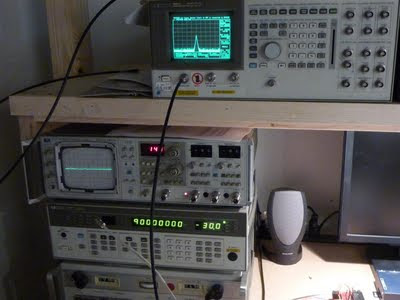 An HP 8656B signal generator would be the test source while the spectrum analyzer in my HP 8922H would be used to verify the attenuation of the cable. As a baseline test, I connected a small 1' high quality 50 ohm SMA cable with Amphenol connectors in between the signal generator and spectrum analyzer. Using a -50dBm baseline, the measured signal through the cable was -50.52dBm at 100Mhz. At 900Mhz, it was -51.65dBm, a good start. Now to place the 60' of LMR-200 inline. Unfortunately I did not have a male N to female SMA adapter so I could not test the cable directly inline. To make the test work I placed a mini-circuits ZFSC-2-5-S splitter inline of the cable. 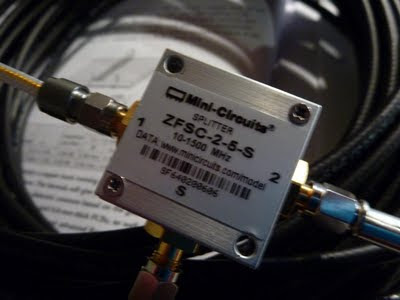 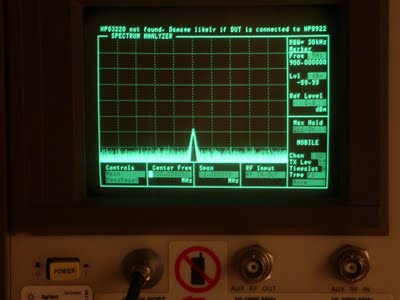 Taking that result and subtracting the loss of the mini-circuits splitter you end up with -56.38dBm, and the difference of that from the original baseline of -50.52dBm at 900Mhz is -5.86dBm of loss at 900Mhz, which is under the spec sheet of -5.94dBm by .08dBm, a very good result indeed. I love it when numbers work out. As a final test I ran a sweep test on the 60' cable using an HP 8754A Vector Network Analyzer. As expected, the loss from 10Mhz to 1300Mhz exactly matched the expected attenuation in the datasheet: 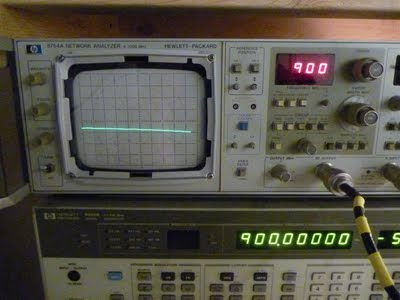 I will be running this cable to my antenna tomorrow. :)
Posted by Unknown at 11:23 PM 1 comment: