This summer there are a few projects I have planned. One of the first is a model rocket tracking / data-logging system for some launches I am planning on performing this summer. I recently came across a good supplier of F and G series rocket engines for a very reasonable price. Some of these engines have as long as a 7.8 second burn making them very exciting to see take off.

The idea of this project is to be able to record all acceleration of the rocket throughout the the entire launch. The tracker will also have a GPS receiver that can log it's maximum altitude as well as track its decent to aid in finding it's landing location in the event of a launch where the rocket landing ends up not being visible. This GPS data will be transmitted through a long range Xbee tranceiver.

The basis of the performance data is an Analog Devices ADXL accelerometer. These accelerometers are very cheap and very accurate. They are available in different models with varying degrees of g resolution. The model I am using here is the ADXL330, a three axis +- 3g accelerometer.

The +-3g of resolution is fine for testing, for the actual rocket launch I will be using a +-18g accelerometer to capture launch and decent data.

The ADXL is a pretty small SMD device, so soldering was a little tricky: 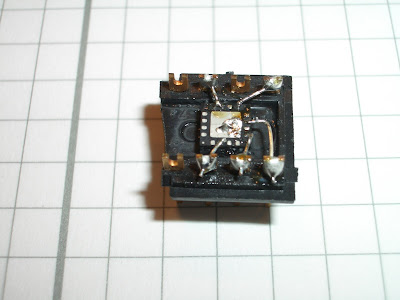 The prototype I am making here is a testing base that will be used for debugging and developing the base station receiving software. I envision making a simple and cool app that will control and display all functions of the rocket from launch to landing. The design is based around a PIC18 series microcontroller. Initial performance testing and range testing will be performed by mounting this prototype to a remote controlled truck to gather data. 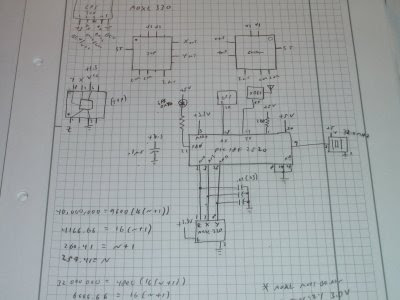 The tracker under development on my bench: 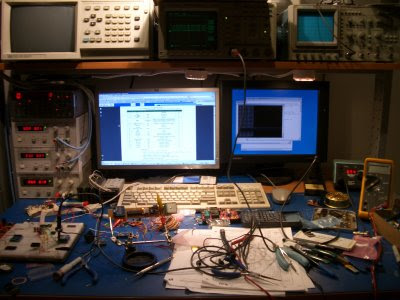 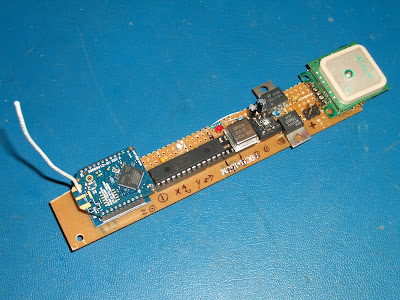 Please note that this device is much too big and heavy for use in a rocket. The final version will be made mostly of SMD devices on a PCB I design using Eagle. Lithium Polymer batteries will be used to save weight as well as using a smaller GPS receiver. I need to be able to save every gram of weight possible. 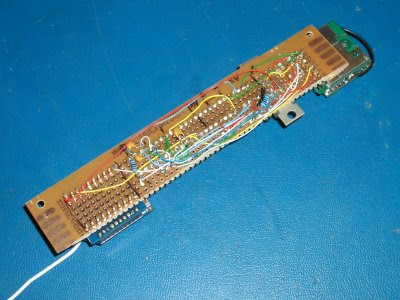 The device is currently working flawlessly as I have tossed the device around outside my home and been able to capture the data from it. Truck testing will occur this coming week or two, I will be able to display actual data at this time.
Posted by Unknown at 11:05 PM 9 comments:

Digi recently released a new series of XBee wireless long range transmitters which I have been very excited to play with. The XBee-PRO 900 series has up to a 6 mile range using a high gain antenna! Some other features from the XBee site:
Jim cam over this past weekend to help me perform some basic ranging tests with these modules to see what type of distance can be achieved in an urban area. The plan was to set up a base station and send messages out to a mobile XBee PRO as a repeater and see how far away we can get without dropping any packets.

The base station is simply an XBee PRO linked to my bench machine through it's serial port via a MAX232. 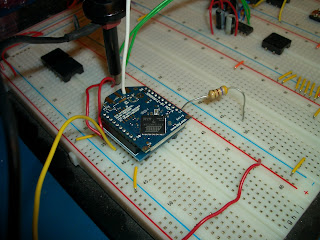 The mobile module is simply an XBee PRO with it's TX and RX lines wired together forming a basic echo repeater. Lithium polymer batteries are being used through a 3.3v regulator. This is simply in basic mode as well, no API mode. 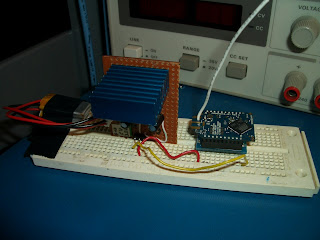 Using Digis' useful X-CTU application for range testing, we were able to get some impressive results. We were not able to get anywhere near a 6 mile range, but with the fact that we were using only the on board whip antenna on these modules instead of a high gain antenna, it was expected. Our testing environment significantly limited the range as well because of the amount of concrete structures in the area. With all of this we were still able to reach a range of several thousand feet before packet loss. A standard XBee would never reach this range. 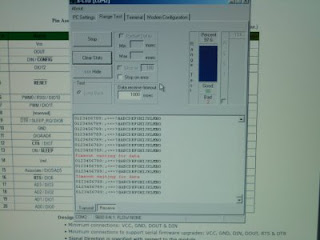 Range was very limited to line-of-sight. If there was a building in between the source XBee and repeater XBee, packet loss would occur in a very predictable manner. This was all happening from the source transmitter being on my bench inside my home, so there was already an initial structure blocking it's signal path.

Our next tests will occur in a more open area which will allow more line-of-sight testing. I am confident that we will reach several miles in this scenario and will report our findings.
Posted by Unknown at 10:24 AM 1 comment: