I recently came across a crazy good deal on eBay, a Scientech SP1000 precision balance / scale. For $15 I couldn't refuse the purchase of a retail $2000 precision scale even though I knew the power supply was not included with the unit. I figured I could just reverse engineer the circuitry to create my own external power supply ( $100 retail value for the power supply from Scientech) to be able to use the scale, and after an hour on my bench my assumptions were correct.
I have wanted a simple scale for awhile now to measure the weight of rocket components to be better able to predict it's performance with my addition of GPS / accelerometer payloads. There are a ton of cheap scales on eBay (mostly from Chinese suppliers) but I knew I wanted something better and more precise than the average drug dealer who purchases these cheap items. After some research I discovered Scientech was one of the leaders in precision balances and began to search for them. I was very happy to find one for very cheap with the absense of a power supply. This is where my reverse engineering began. The scale had a 5-pin din connector for power. Knowing that this was not going to be completely simple, I tore the unit apart.
To reverse engineer it's power input, I first located it's ground pins. I did this by locating known ic's and metering their ground pins to a pin on the power connector. Also noticing large ground planes on the board helped as well. There ended up being two grounds pins on this board. Two pins down, three to go. Once the two ground pins were identified, I went for non-ground voltages. The first I discovered was a +5v line. I traced the pins back through taces from some known 7400 TTL logic ic's and was able to identify a +5v input. So one pin from the power supply provided +5v. 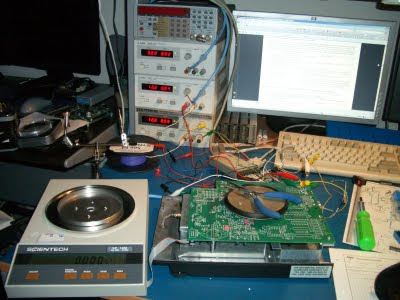 Moving forward I was lucky to find a label on the board indicating -12V. I followed this trace back to the power connector and identified one pin as being definitely -12V. Another pin from strictly an assumption would be +12V. I followed the traces from this last pin around and discovered they followed the -12V traces to a regulator, indicating that my assumption was probably correct. Time to power up. 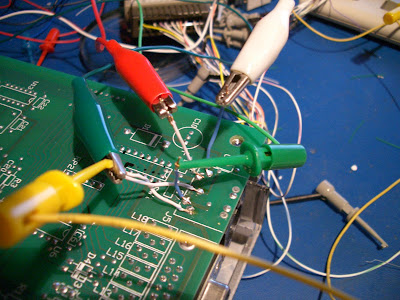 After making all connections to my power supply, i powered up the +5V line first. Pressing the power button resulted in the display turning on with '-----'. A good start. I set my +12V and -12V supplies to current limit at .1A as to not burn it out if I was wrong, and slowly raised the voltage on each. Once about 10V on each was hit, the device came to life. I had a working scale with the exception of some errors on display. With some testing I discovered it was just pissed because the measuring tray did not have the full tray on it (applying a certain amount of weight). Placing an object, pliers in this case, on the scale are powering back up it turned on completely and successfully. I just now need to design a high quality linear supply for it for +5V, -12V and +12V voltages.
It's interesting to note that this small wire-wrap wire: 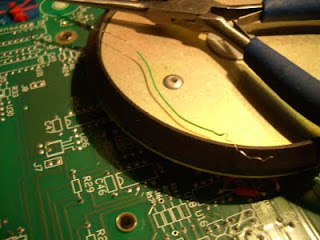 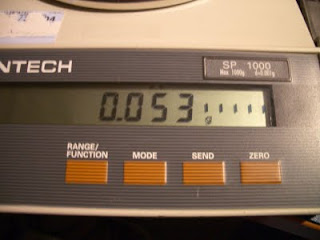